Our little nugget. Logan brings so much happiness in to our lives. He is the perfect little brother, and lately he’s been watching Lucas & even laughing at the things he does. I can’t blame him, Lucas is one silly kid. It’s so much fun to see them together and to see how much Lucas loves his little brother.

Sleeping // We’ve had a few times where he’s had a 4-5 hour stretch (woo!) but still pretty much waking up every 3 hours or earlier at night. We have yet to take the plunge in to transitioning him to his crib because I’m a procrastinator and just not ready to accept the fact that my baby is growing up. I plan on trying to start having him nap in his crib within the next week – wish me luck!

Breastfeeding // All he wants to do is nurse! We’ve been trying to mix in some bottles but have not been having much success. He refuses the bottle most of the time. Lucas never really did this, so it’s definitely new territory for us. We’ll just keep trying though! I’ve gotten advice from a few people saying to try different bottles, for me to not be in the same room/house when he is getting the bottle, heating the milk up. Any and all advice is appreciated, and we’re trying it all to see what will work.

Weight // Such a chunk! He is weighing in at 14 pounds! I scrolled back through my Instagram and saw that Lucas weighed 14 lb 7 oz at four months old, so I’m thinking that Logan is chunking up a little faster than Lucas did. He for sure is a solid little dude.

Milestones // We had Logan’s christening this month. Such a special day for our little man. He did so good, basically slept through the whole thing. He also had his first holiday – Halloween! We dressed him up in a little pumpkin onesie from Carter’s and was the cutest little pumpkin ever. (Lucas decided to be a cowboy at the very last minute after saying he wanted to be Minions, Trolls, or Maui from Moana for months because toddlers.) Logan has also been talking a lot – a little chatterbox just like his brother – and he legit laughed watching Disney Jr. the other morning. It’s so amazing seeing his little personality develop. Also, Logan ALMOST rolled over today! He was so close, I feel like it will be happening soon.

Eye Color // Looks like we are going to have a blue eyed baby boy! Lucas’s eyes had for sure changed by 3 months, but Logan’s are still blue just like his daddy. I love that Lucas has my eye color and Logan has Brandon’s.

After finding out about Logan’s heart murmur and the little hole in his heart, I’ve become even more protective over him, even though I know he’s healthy. I feel guilty when I leave him to go anywhere sometimes. When he falls asleep, I’ll hold him an extra 10 minutes before I put him down. I smell his little fluffy hair on the top of his head, and I just want to soak up all of the baby-ness before he grows up. Parenthood makes you feel all the feels, times a million. 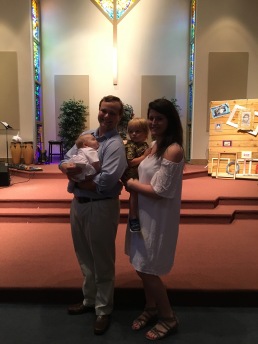 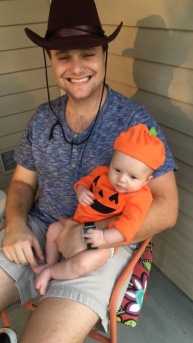 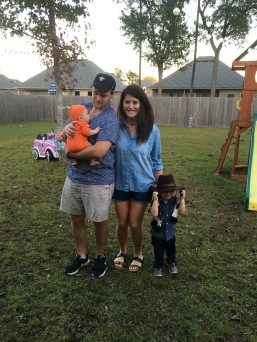 Being a mom of a toddler and a newborn is exhausting y’all, but in the best way. Sleep is hard to come by, but I have to say I feel much more used to it this time around. Even though I’m getting even less sleep than when Lucas was a newborn, I know that eventually I’ll get to sleep again, and I feel like I can function on much less sleep. When Lucas was a baby, I used to nap with him. Now that we have two babies, they’re hardly ever sleeping at the same time – so no naps for me!

I pretty much lost all of my baby weight from my second pregnancy within the first 2 months after Logan was born, but I honestly still have about 15 pounds from my first pregnancy to lose. I have been trying to go to the gym more often, but some nights I’m WAY too tired. I did a workout DVD at home last night & it freaking kicked my butt. Going to try to make it a priority this month to eat better and stick to working out.

Becoming a mom of two, I am definitely more confident in my abilities to care for a newborn. We are doing things with Logan way earlier than we did some things with Lucas. I did not take Lucas to the grocery store by myself probably until he was almost a year old – have already done that with Logan. Anytime Lucas would cry in the beginning, I would get so anxious, especially in the car. Now I know that babies cry sometimes, and it’s okay. Don’t get me wrong, I try to calm him down as quick as possible, but I don’t feel frantic. Have y’all ever seen that diaper commercial where it talks about first baby vs. second baby or first time mom vs. second time mom? So much truth to that commercial.

Some days I feel like I can conquer the world, and other days I haven’t washed my hair in 3 days and barely remember to eat breakfast. It’s all about balance, right? A lot of times I feel like I hear a baby/toddler crying even when no one is crying. Lucas has reached the “terrible twos” and will go in to hysterics because we gave him the wrong cup for his milk – that is a real thing that happens. But then Lucas tells me that I’m his best friend and Logan snuggles up to me & falls asleep and honestly, there is nothing better than that in the whole world. Raising kids is HARD WORK, but the most rewarding work I have ever done & I couldn’t imagine my life any other way. My body is so tired, but my heart is so so full. 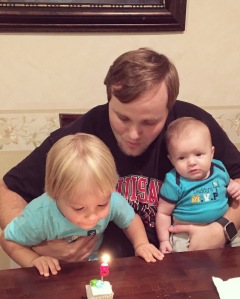 Hope you guys are enjoying these monthly updates & following along as our little man grows! Thanks for stopping by! 🙂