Sleeping // HA HA. Oh, that wasn’t a joke, sorry. We have had few & far between nights where he will sleep 8+ hours. Most nights he is still up anywhere from midnight-2AM then usually will end up falling asleep on me while nursing then sleeping on me the rest of the night, crushing my organs. But y’all, I’m just so tired I can never make myself stay awake long enough for when he’s done nursing. #momlife aka zombie life. Also did I mention he’s not a napper? I don’t know where this kid gets his energy besides sucking all the energy out of me.

Breastfeeding // We are still breastfeeding! I can’t believe we’ve gone this long! This journey has really been one of my biggest accomplishments in life. We’ve never had to supplement formula, just my milk completely nourishing my little man who is happy and healthy, and it just makes me beam with pride. I also want to say, because I know breastfeeding/formula feeding can be such a touchy subject, that I am in no way anti-formula feeding. I truly believe that fed is best. I had completely weaned Lucas from breastfeeding when he was 5 months old. Every child is different, every experience is different, but to be able to make it to almost a year breastfeeding Logan has been something that I will never take for granted. It is however MUCH harder to nurse him now. He pinches and takes everything with him as he whips his head around to see everything going on. Obviously much harder than breastfeeding a 5 month old, but worth it. I was also so sure that I was going to stop nursing at a year, but now I’m not so sure. We’ll see how that goes.

Milestones // WALKING you guys! I guess I should have been prepared for that since Lucas started walking at 11 months, but man I am NOT prepared. He’s saying a few words like mama, dada, and bubba (of course) but also “pup pup” and the other day it sounded like he was trying to say “cupcake” (priorities) Eating everything. Brandon usually gives him a little bite of whatever we’re eating to test it out. It can be tricky because he has NO TEETH yet, so I get very antsy about what food he gets because I’m all like “How can he chew?!” But so far he hasn’t really had much that he’s turned down. He did throw up a little bit for the first time eating those little Gerber grabbers diced apples, so those are a no go right now. I made some veggie pasta the other night though and he loved it! Also donuts & pancakes & biscuits are a huge hit right now. Dude loves him some breakfast food. 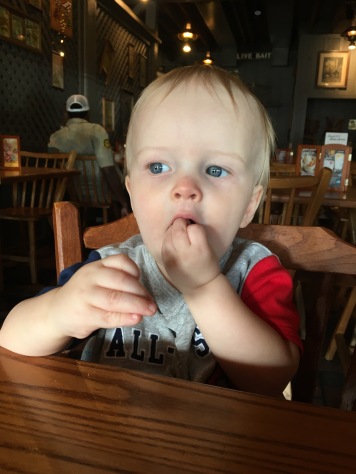 Nommin’ on some pancakes at Cracker Barrel 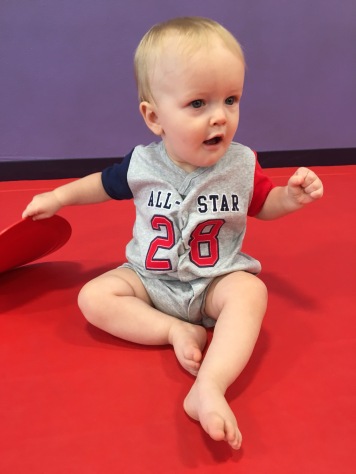 At The Little Gym playdate with New Orleans Moms Blog

Y’all. Honestly, it’s a rollercoaster. The absolute highest highs with a few lows thrown in every now and then. Mommin’ is hard. My boys fill me up with so much love every single day but also exhaust the heck out of me. Right now I’m having a lot of anxiety about weaning Lo from breastfeeding. I think it’s going to be hard for him & me. I know our breastfeeding journey is getting closer & closer to it’s end, and that makes me really sad. The fact that my baby is about to be a year old is really just hitting me in all the feels lately. I’m not ready for it. Time is such a thief. Didn’t I just birth him?! The other day I was thinking back to those first few days with our little man. The newborn sweetness. The snuggles. Meeting him for the first time. The jaundice. Bringing him in for extra blood work. Figuring out our new normal as a family of four. Those days seem like such a blur now. But anyway, I guess all I’m saying is that I’m pretty much just an emotional mess & all over the place right now. That’s motherhood though, am I right?

How old are your little ones? When did you stop nursing & HOW DID YOU DEAL?! I feel like I’m going to need all the help I can get!

Thank y’all so much for stopping by & keeping up with us 🙂 Have a great week!