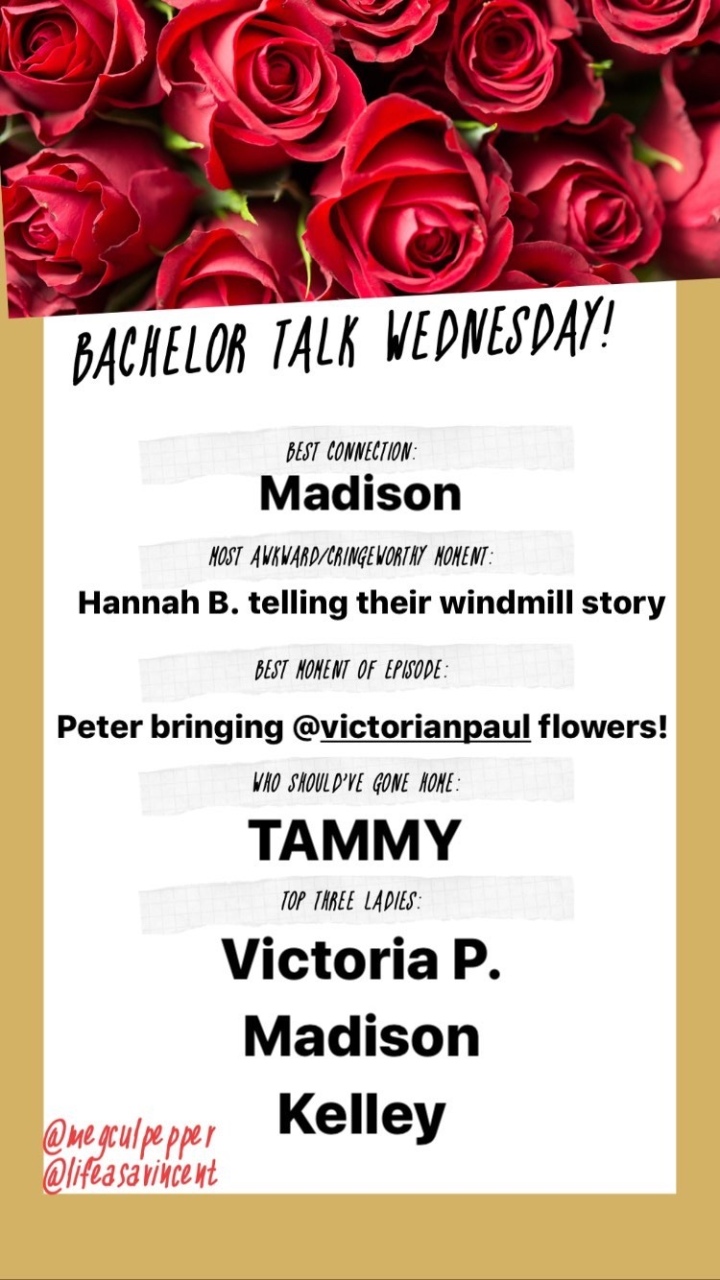 It’s that time of the year again…The Bachelor is BACK on our screens! That stretch from the end of Bachelor in Paradise seasons to the beginning of The Bachelor seasons seems like such a long time to not have anything Bachelor-related on our TV screens. But we’re back in business and this season is looking like a good one. I have been a fan of The Bachelor for a loooong time, probably about 15 years! My mom and I used to watch together all the time, and now sometimes I lovingly force my husband to watch with me (just kidding! kind of) but anyway, I am super excited for this season! I think it’s going to be much more entertaining than the past few seasons.

My friend Danielle and I are going to be doing Bachelor recaps on our blogs, as well as Insta-stories, for the episodes. We have a graphic to share on Insta-stories so we can all chat about the Bachelor, which I’ll share later in this post.

Let’s get to the recap!

Right out the gate, it’s all planes and windmills. If The Bachelor does not have a sponsorship from a windmill company by now, then what even is the point?

Just within the interviews from before they come on the show, I can already tell that Victoria P. is going to be one of my faves this season. She literally seems like the nicest person ever (even when she steals Peter during the cocktail party, she compliments the other girl about her dress and you can tell it’s genuine!) and the way she got emotional talking about Peter during her interview…she is definitely there for the right reasons!

I feel like the whole first night was a lot very quickly. Like the girl who blindfolded him and then made out with him when she got out of the limo…as in the first 10 seconds she met him while in the midst of him still meeting all of the other women. Also all of the other girls who talked about windmills or FOUR TIMES as they got out of the limo. Think about it like this: this could be the first time you’re meeting your husband, do you really think it’s going to be you and him at the end if you come out of the limo talking about how many times he did it in a windmill with his ex? NO. These girls have no chill.

Peter and Kelley have previously met in a hotel lobby before! That was surprising. I was confused on the whens and hows of that situation, but at some point after Kelley had already been picked to be on the show she randomly met Peter. It’s never said if anything happened between them or what, but she definitely has a connection with Peter and none of the girls are happy about it.

Hannah Brown gets out the limo and I’m like nooooo. I don’t think it’s fair to have Hannah so featured on this season. I think it’s obvious that both her and Peter had(have?) very strong feelings for each other and I don’t think it’s giving Peter or the girls on his season a fair chance. Hannah had her show and she didn’t pick Peter once or twice, so let him move on.

I also think it was pretty obvious that some of the girls are more serious than others. The girls who were talking about Peter like he was a biscuit “buttery, flaky” …like I’m sorry, what?

When the rose ceremony finally starts it is legit already morning the next day. WHAT a long night. I don’t think there were many surprises as to who went home, mostly girls that either didn’t get time with him during the cocktail party or their time wasn’t shown so it must not have been that important. The only person who I was surprised went home was Maurissa. I felt like her and Peter had a connection when they talked during the cocktail party, so I wasn’t expecting that. I was hoping that Tammy would go home because she just was not my favorite at all, but I think she’s going to stir up some drama during the season.

The girls have somewhat of an aviation boot camp. Peter is sitting next to Hannah Ann, obvs. Victoria P. gets motion sickness and pukes all to win Peter’s heart, now that is commitment! Some of the girls (aka Tammy) get mad at Kelley for “cheating” during an obstacle course. It doesn’t matter because Kelley wins and gets to go on a sunset flight with Peter where Peter flies the plane because I DON’T KNOW IF Y’ALL KNOW THIS BUT PETER IS A PILOT, so basically it doesn’t matter that the girls think she cheated but they’re going to create drama about it anyway. That just seemed really petty to me. After Peter and Kelley’s sunset flight, all the girls have the night portion of their date with Peter AT THE VERY HOTEL WHERE PETER AND KELLEY PREVIOUSLY MET. Not going to lie, that threw me for a loop. I didn’t know ABC had it in them to do that to stir up the drama, but they proved me wrong! Kelley gets the group date rose and the girls are mad, go figure.

First One on One

Peter picks Madison to go on the first one on one which is actually to his parents’ house where they are renewing their vows! That was such an intimate date, and I don’t think Peter would have taken Madison on that date if he didn’t think there was a serious chance of it being him and her at the end. The date is the sweetest, and I ugly cried during his parents’ vow renewal. I just love the family dynamic between Peter and his family. You can just tell there is so much love and happiness and closeness between them. It just makes me happy watching them and thinking that one day that could be my boys and our family. Watching this show as a mama is such a different experience! Haha but back to the date. It’s obvious that he and Madison have a strong connection, and I think if she doesn’t make it the whole way then she’s going to be in the top 3 for sure. She gets the rose.

The girls pull up to a theater and Peter says he has a very good friend there planning their date. They go inside and there is Hannah B. standing on stage with a DANG WINDMILL and proceeds to tell the story of when her and Peter had sex in a windmill FOUR TIMES. This was painful and super cringey to watch. I just wanted it to be over. I felt bad for Peter’s girls for having to stand there and listen to Peter’s ex talk about their sex life. It was super awk. The girls are then supposed to come up with their own sex story that they’ll have to tell to an audience. While the girls are brainstorming, Hannah is seen talking to someone about her feelings towards Peter then goes in to a back room and starts crying. Peter finds her and they start to have a serious conversation. Peter admits to watching Hannah ask Tyler C. out on AFR and then tells Hannah that before that happened he had told his parents that if Hannah had wanted to give it another try with him he would have been in 100%. Y’all I was crushed for Peter during this. It was also painful to watch. I don’t know why Hannah B. is doing this, whether it’s a contract with ABC or if she genuinely thinks maybe Peter will be with her, but I don’t like it. She had her chance and although I feel awful with what happened on her season, that was decisions she made. Peter is not a third choice!!! He seems like such a genuine guy and deserves to be with someone who chooses him first every day! Peter asks if she ever second guesses her decision to send him home and she says “Yes Peter, all the time.” and it was the most. dramatic. ever. Then in typical Bachelor fashion….to be continued.

Y’all. I really hope after next week’s episode this whole Hannah B. thing will be done and Peter can have his own season. This season looks super promising, and I can’t wait to see who Peter ends up with!

Who are your favorites this season? Do you think Hannah B. should come in to the house or should she and Peter go their separate ways? I’m going to go ahead and put the Instagram graphic up, if y’all want to join in on the Bachelor talk on Insta tag us! @megculpepper & @lifeasavincent Or leave a comment and let me know what you think about the first episode!

Here’s to a great season and Pilot Pete’s journey to love!